As per usual I need to apologize for taking so long between posts, this fall really got away from me! Our moose rifle season opened up on October 17, and just recently closed on December 15. Normally we aren’t as concerned about the closing date as it is a long season and we usually find success within the first two weeks. Unfortunately, that was not the case this year, for our group anyway.

For those who aren’t familiar with our moose application process, it significantly improves one’s odds of drawing a tag if you apply with a group of hunters. It’s a complicated system and is actually being completely redone for the 2021 season, so I won’t get into it in too much detail, but we were a group of 7 hunters this year and I held our cow tag.

Our bad luck started on the second day of the season when one of our group members missed a cow that could have filled our tag. The day only got worse as during the evening hunt I misidentified an orphaned calf for a cow and shot it, with the two week calf season not yet being open. It can be a real challenge to tell the difference between a calf and a yearling cow, especially when the calf isn’t next to it’s mother for comparison. On top of standing there solo, it was in knee deep water which hid one of the identifying features of a calf; they seem overly “leggy”. Anyway, we brought the calf back and reported the error. The moose was seized and donated to the local food bank, and I was issued a fine for the mistake, but was still able to keep the tag. All in all I’m very saddened to have mistakenly killed the wrong moose, but am very happy to see it donated and not going to waste.

In the meantime, we had three groups of hunters in camp. Two of the groups filled their cow tags on opening day, and the third group managed to fill theirs mid-week. My group was only hunting on the weekends to start, as a lot of the guys don’t have or can’t take any vacation, so I spent the week getting camp closed down and packing up to move home. We hunted the second weekend without any success, and then I finished closing down camp and coming home that following week. We had some unseasonably cold weather and some snow through the end of October, with temps easily getting down to around 20 degrees F, so it was nice to get the pipes drained and get home.

Once home I continued the pursuit of our moose with a couple of breaks to go down to my cabin near Fort Frances to hunt deer, which I’ll elaborate more on shortly. We continued moose hunting through November whenever I was home, without any luck. November is typically a tough month to hunt moose as they seem to duck into the thick woods and are very hard to locate. I believe this is a response to the hunting pressure they feel during the last two weeks of October. The moose being in hiding paired with some unseasonably warm November weather made for a very unproductive month. Things began to look up in the last two weeks of the season though as temps dropped and we began seeing a few animals. The moose we were seeing were either the wrong sex, or were taking off before we ever had an opportunity for a shot. And then our bad luck continued, when a second cow was missed cleanly by a group member two days before the season closed. That was the last moose we saw despite hunting two more days, and really summed up our 2020 season, and 2020 as a whole – haha.

Despite not getting our moose, it was a lot fun being able to spend so much time hunting. Of the 46 days the season was open after we got home from camp, I either deer or moose hunted 42 of them. It has been insanely busy and a little exhausting, but an absolute blast. Before I move on from moose hunting, I should post a picture I received of the only archery moose taken at camp this year. You can read more about the archery hunt in my last post, but here is a picture of the bull taken by Scott Kelvin and his group. 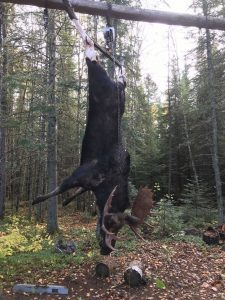 Fortunately, Lindsay and I were a little more successful deer hunting than we were moose hunting. I made two trips down to the cabin to deer hunt, being joined periodically by Lindsay and some friends. The first trip was joined by my friend Matt, who helped me transport in and install a new air tight stove where there was once an old cookstove. It went really well, but was a bit of an adventure as we have to ATV into the cabin. Here are a couple pics of our set up and the new stove installed: 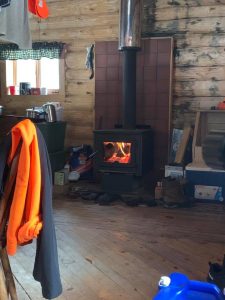 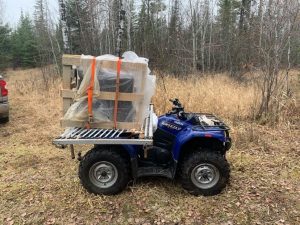 As for the hunting, Matt only had a buck tag and two short days so he was unsuccessful. Lindsay joined me for the rest of the week though and after holding out for the first half of the week hoping for a buck, she spent her tag on a nice mature doe. It was her first deer and she made a great shot on a really nice deer! With very little help and some instruction, she gutted and skinned it herself, and we butchered it in the cabin over a couple of drinks the next night. 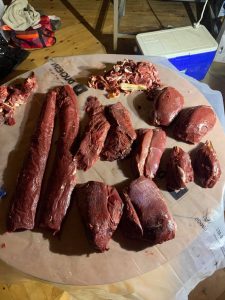 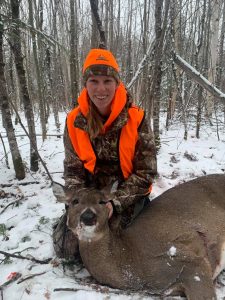 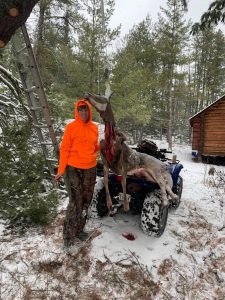 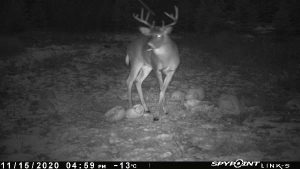 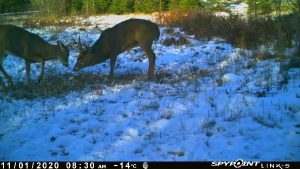 Unfortunately, we had an unseasonably warm November as I mentioned above, and it made the bucks totally nocturnal. I hunted hard for almost two weeks with no luck. I came home to try my luck filling our moose tag and to get a little work done around the house, before returning to the cabin for another week to chase deer. Unfortunately, the week I returned, it seemed all of the deer went nocturnal and I couldn’t even find a doe to put my tag on. I was completely shocked as the first trip down we saw does almost every sit. My luck changed on the last evening I was there however, when a doe with two big fawns came to my bait pile. I never had a great shot on the doe (I don’t love orphaning fawns anyway) and she was acting a little cagey as I think she may have winded me, so I took one of the fawns so as to not go home empty handed. It wasn’t the buck I had been chasing, but that’s totally fine with me. I am thrilled to have gotten to take a couple deer from the property and to fill up the freezer!

Now pretty much all of our hunting seasons have closed and things are slowing down and returning to normal. It was a great fall, but I’m ready for a break. The weather has gotten back to normal as we have about 8-10″ of snow, and temps are around 10 degrees F. The ice is a little behind this winter, but is safe to walk on and should be safe to snow machine on soon. I haven’t been out fishing at all, but plan to this week before Christmas.

We would like to wish everyone a Merry Christmas and Happy Holidays! Hopefully 2021 will be a significant improvement on 2020 and we can get the borders open and see some familiar faces. We are yet to hear anything about the border prospects for the new year, but we will be sure to keep everyone posted as we learn anything.