Well despite some colder temperatures and a fair amount of snow through the end of November and December, January has been incredibly warm. We haven’t got any fresh snow in a while and temps are swinging between 10 and 32 degrees Fahrenheit. There seems to be enough good ice to travel by snowmachine and to ice fish, but it is definitely not nearly as thick as it should be. Some lakes still only have around 8″ of ice and in a typical year we would see over 12″ by now. We’re lucky we got a bit of cold at the beginning of winter to build the ice or we wouldn’t hardly be doing any fishing at all yet. And since we have enough ice to go fishing the warm temperatures aren’t all that bad, it certainly beats -40!

So far Lindsay and I have only been ice fishing twice. Both times to a small stocked lake close to town where we can chase splake. They are just little guys but are great pan friers and are a blast to watch come in and hammer your spoon in crystal clear water. This weekend we are planning to get out a little more and will be spending two nights camping out on the ice in our portable shack fishing for lake trout and walleye. We are both really looking forward to our first couple nights out there in 2023!

Mom is doing really well and has been enjoying the warmer winter so far. She is busy as usual volunteering and helping out all over town and having weekly lunches with friends. We are currently in the midst of planning a 2 week trip to Cuba with her over the first two weeks of March and we are all very excited!

We had a very busy, but very fun and exciting fall. As I detailed in a previous post, we didn’t have much down time between coming home from camp and going deer hunting, and then returning home for 3 days before heading out to Montana for what ended up being 3 weeks. We were headed to Montana with 2 elk tags and 2 deer tags, so we weren’t overly worried about taking a deer during our first trip down to the cabin. We were joined by some friends from Thunder Bay who were looking to take a deer home for some meat, and Matt did just that shooting a nice doe opening weekend. They left on Monday morning and Lindsay and I stayed the rest of the week relaxing and hunting. Despite seeing a lot of deer we didn’t see anything that we wanted to shoot, as we weren’t planning on taking anything unless it was a really nice buck. 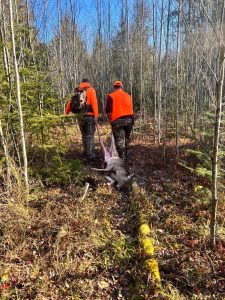 After a very busy 3 days at home, we were headed for Montana. We had an absolutely wonderful trip and spent 17 days hiking and hunting both the mountains and their surrounding prairies. We got hammered with early season cold and snow the first week there and were pushed out of the mountains by about a foot of snow after only 4 nights. At 3:30 in the morning we had a couple of inches, by 6:30 when we decided we should start packing we had about 8-10″ and a couple hours later as we were leaving there was a foot or more. Well right before we started packing up camp as were enjoying a quick cup of coffee and getting dressed, it was quite clear to me that there is none I would rather be getting snowed into the mountains with then Lindsay, so I asked her to marry me! After she said yes, and we were done embracing and enjoying the moment, we immediately got to work tearing things down so we could get on the road out of there.

We relocated to a nearby motel for a while until the storm stopped and we could come up with a new plan of where to set up camp. We ended up spending 6 nights at the motel as another few smaller storms and crazy cold temperatures (down to -15 F in November) kept us there longer than planned. We hunted from the motel each morning and I was able to shoot my first mule deer during that leg of the trip filling the 1st of our 4 tags. 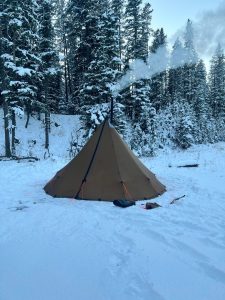 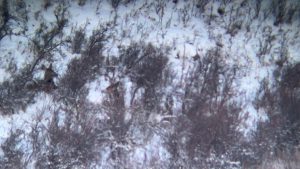 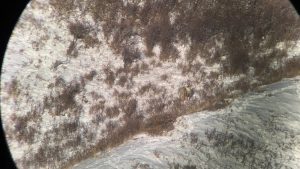 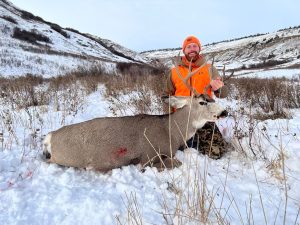 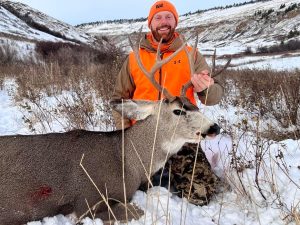 After the weather stabilized, we decided to head about 50 miles south to change units and to try to get to more accessible roads as we had seen about 30″ of snowfall up in the mountains and probably 18-24″ down on the flat prairie where the wind was blowing drifts 5′ tall in some extreme cases. We set up our tent in the mountains again and decided to try to focus on elk for the last half of the trip, hoping to fill Lindsay’s deer tag if we stumbled into a deer along the way. On our first morning of hunting we glassed up a herd of elk and spent all day watching them bedded in a small patch of timber, waiting for them to come out into the open and to feed down their side of the canyon into rifle range. We had lots of time so we decided if they didn’t come into range on their own we weren’t going to try to force anything for fear of being seen and bumping them out of there – we could always come back first thing in the morning and try again. Well, after watching them work in and out of the patch of timber all day, occasionally almost coming inside our 500 yard limit, they spooked. With 90 minutes of daylight left, and as they were feeding directly down into the area we wanted them too, either us or the pack of coyotes that started howling spooked our 20 or so elk and we watched them leave our lives at a full run, never firing a shot. We were able to relocate the elk that night right before dark, but unfortunately they must have moved over night and were no longer there the next day. 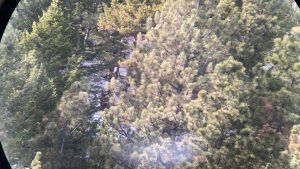 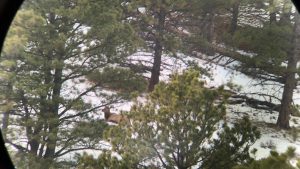 We decided to give that area some time to recover without any pressure so with 3 days left of the season we headed to a new area that we thought could have elk and should certainly have deer. After watching a lot of nice bucks move onto a privately owned ranch from the publicly accessible area we were hunting, we decided to go ask permission to hunt the private land thinking we could quickly fill Lindsay’s deer tag and then spend the last 2 days trying to relocate the herd of elk. The folks who owned the ranch were incredibly nice and welcoming and after a brief introduction they told us we were more than welcome to chase the deer on their land. Well, like a lot of the trip things didn’t exactly go to plan. Despite there being deer everywhere, due to some really unfortunate equipment failures it took us 5 stalks on 5 different white tails over the last 3 days of the season to fill Lindsay’s deer tag. But after a lot of frustration, and a lot of crawling through frozen and very flat cow pastures, Lindsay shot a great 8 pointer to fill her tag and wrap up our trip. 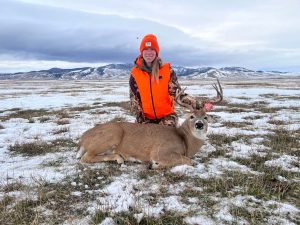 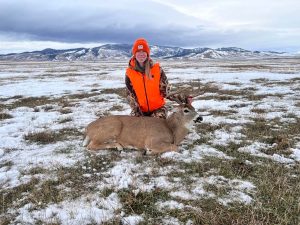 For those who are interested I’ll be writing a sort of day by day journal of our hunt and will share it on the blog in the next week or two with some more pictures and to elaborate on the hunt and all of the challenges we had.

After returning home, I went for one last trip to our deer cabin with a friend looking for a deer for his freezer, and one more for ours before the season closed on December 15th. Over that weekend Johann was able to take a nice young buck and I shot a yearling doe, before closing down our cabin and the 2022 hunting season just in time for the holidays. While we were gone to Montana, my moose hunting group was able to fill our cow tag at home, and Lindsay’s group with her dad and grandpa filled theirs the opening week of the season in October. So all in all we had a great 2022 hunting season, made a lot of memories and had a lot of fun, and have full freezers for the year.

Take care and keep an eye out for the next post detailing our Montana hunt!