Well, the materials for our new shed have arrived, and my carpenters should be here to start the build on Monday. A little later than expected, but everything this far in the bush takes more time than one thinks. At least progress is being made and we can start building. I can’t wait to have a functional work and storage space!

The weather has been pretty typical, the hot days pushing 85-90 degrees, but still cooling off nicely at night. We had some much needed rain over the last two days. Despite all the rain in the States, it has been pretty dry up here. So dry in fact there are number of forest fires north of Red Lake and in Manitoba and we have been getting quite a bit of the smoke drifting in to camp. Some morning its like a heavy fog and it’s difficult to see across the lake. 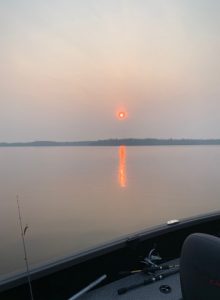 Despite not seeing a lot of rain, the water level has been holding fairly well. I would say it is about average for this time of year, and the bit of rain we just got should help hold it for at least a little while. The fishing has been good, but spotty. When found schooled up, the walleye are being caught as quickly as you can get your bait in the water. However it can take a little work to find these big schools as they seem to be in non typical locations. I heard reports from this week of some groups doing exceptionally well in 9′ of water still, when usually they would be a little deeper by now. It seems that the reefs are just starting to become active as well. I have fished some of the bigger ones over the last couple weeks and they are just starting to be found on the tops, another week or so and I think they will be producing some really nice numbers of fish.

Here are a couple pics I took from a little fishing I did with my trusted side kick earlier in the week: 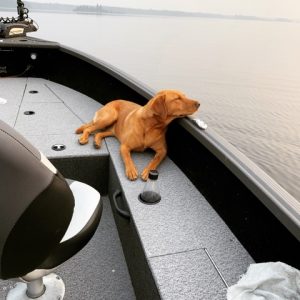 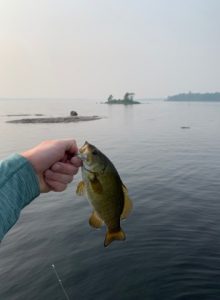 As you can see, she sleeps on the job!