Now before I get into all the good stuff like the fishing report and pictures, I have a few housekeeping announcements that we need to make. The first is about Mom having a bit of a fall. Next is regarding our landline situation, and then I will follow that with two new rule changes to the fish and game act for this year and going forward.

On July 8, Mom tripped and fell outside the grocery store, and unfortunately broke her hip. Fortunately for her and us it was my ex Hali who was essentially the first one to find her, and was a huge help in getting her up and taken care of. Mom (reluctantly) went by ambulance to Dryden where they determined she had a break and would need surgery, so she was flown to Thunder Bay. There she had a partial hip replacement and was flown back to Dryden a couple of days later. She was released from Dryden on the 16th and was brought back home by Lindsay’s parents where they got her in and settled on their way out to visit us at camp for the week. Since then, Mom has had some pain from the break but nothing she can’t handle, and is recovering well. It will be 3-4 months before she is able to resume all normal function but knowing her she will be getting herself into trouble before then. We would like to say a big thank you to Don, Mary, and Jake (Lindsay’s parents and grandpa) and to Hali for all helping out and getting Mom taken care of.

About a week ago we received a phone call from our phone provider Bell Canada, that they would officially be decommissioning our very archaic radio phone system. Truthfully we have been expecting this to happen for some time and aren’t really surprised. Now that we have our very reliable Starlink internet, we have found Wi-Fi calling through a cell phone to be a very good substitute to having a landline. So, our response has been to have our current business number (807 934 6911) ported over to a cell phone that we will be able to use both at camp in the summer and in town during the winter. What does this mean for you guys? Truthfully, not a whole lot with the exception of us no longer having a different winter and summer number, and that you will now be able to text us at the above number if you would like. I think this is actually going to be a convenient change for everyone, not to mention cheaper for us!

Next are a couple of rule changes. Both are in response to the rising aquatic invasive species problem in North America and that is unfortunately spreading through Ontario. The bulk of the spread in Ontario has been limited to more populated areas that are also adjacent to the Great Lakes, say around Toronto. However, the spread of those invasive species is increasing and the government is trying their best to keep them out of our pristine waterways up here in the north.

The first rule change is very simple, and for those of you who travel through Minnesota you will be familiar with it. You must now remove the plug from your boat hull and livewells when travelling across land with your boat. The plug will need to be left out of the boat until you are ready to launch at your next location, with the only exception being that you are allowed to keep water on board in one vessel (livewell, bait bucket, etc.) to keep live baitfish alive.

The second change is a little more complicated. In an attempt to monitor and police the movement of baitfish across the province (for example: bringing bait from the invaded lakes in the southern portion of the province north up here) the province has been divided into various baitfish zones. Baitfish can be moved between these zones if you are headed from our clean northern water south, but it is now illegal to transport the bait from the south to the north. To police this it is now mandatory that if your primary address isn’t within the borders of the baitfish zone that you are fishing, then you must keep the receipt from purchasing bait on your person at all times and be able to produce it for an officer if you are checked on or off the water. For folks crossing in Pigeon River who stop to get bait along the way, both Thunder Bay and Kakabeka Falls are within our baitfish zone and it is legal to bring that bait with you as long as you keep and bring a receipt. Same goes for anyone crossing in International falls, you are still within our zone and bringing bait acquired along the drive is still legal. For our own purposes, we are now required to give every group a baitfish card that you will have to bring with you when you come to get bait, and that we will tally your bait on. This will act as your receipt. We have spoke to officers from the MNR and this is their recommendation to keep things as easy as possible for both guests and outfitters alike, and so we don’t have to provide a new receipt with every bait purchase. You will only need one card per group if the group is expecting to fish relatively closely together. If you are completely splitting up it might be best to get one card per boat. You will have to remember to keep the card on you while you are on the lake.

Lastly, and this has been the law for a while but it does not hurt to have refresher:

It is illegal to (or attempt to) deposit or release into, or within 30 metres of, any waters:

Essentially, don’t dump your bait buckets or worm bedding (even devoid of worms) within 100′ of any lake’s edge.

Okay, now onto the more interesting stuff! Until this week the weather has been great. We have had a few hot days or short periods of intense heat, but it never seemed to last too long. Whenever we got any rain it was mostly during the night or it wouldn’t last very long during the day, and the average temps were 70-85. That was until this week however, where we started off the week dipping down into the 50’s! Now the days have warmed up and when the sun is out it is actually quite hot, but it has rained almost every day this week. Hopefully it breaks tomorrow and folks will have a nice day and a half to round out their week. The mosquitos are still bad but have definitely improved since a few weeks ago. We are really hoping all of this new water doesn’t spark another hatch.

The fishing has been really, really good! I have been hearing weekly from groups old and new alike that this is some of the best fishing they have ever seen either on Press, or in a lot of cases in their life. The walleye were slow getting to the humps, likely from a late and aggressive may fly hatch a couple of weeks ago. Since then, they have been moving onto the various humps and are being caught out around Red Rock and on the reefs on the big water too. 7 Pine Island and Gull Rock have been producing well, as I’m sure are most of the other reefs out there.

We have been receiving a lot of fish pictures lately, so a big THANK YOU to everyone who has been taking the time to send them in! Below are some pics from the Oswald crew: 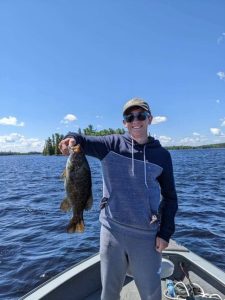 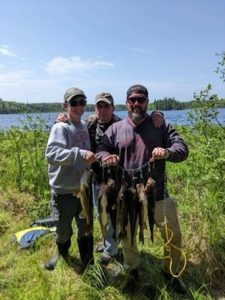 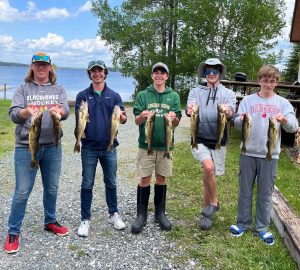 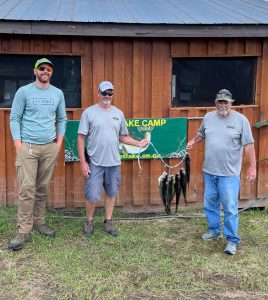 Here are some from the Stauffer group: 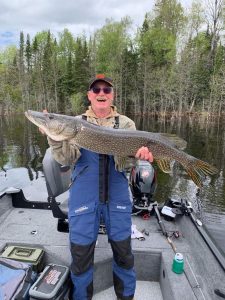 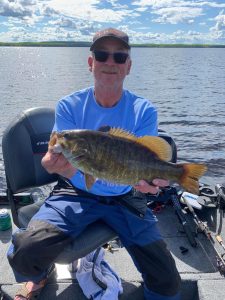 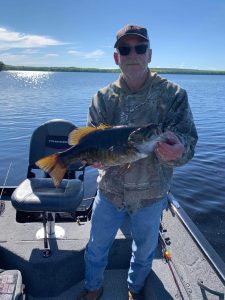 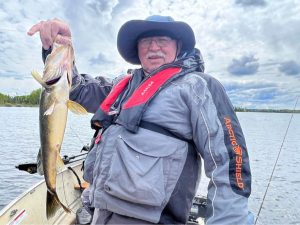 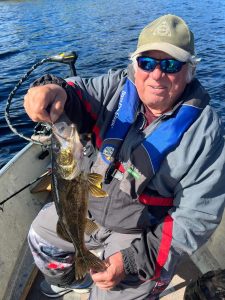 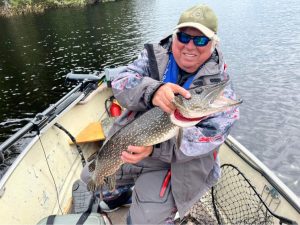 From the Western group: 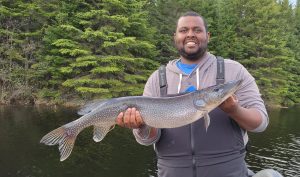 And lastly a picture from Garret Pratt from 2021: 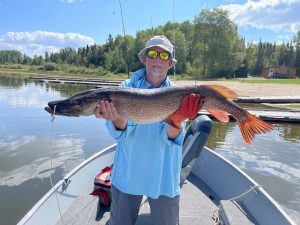 Well I think that is all for now!