As the title suggests, it seems as though the travel ban is going to be extended another 30 days until July 21. This has not been confirmed yet and no agreements have been signed, but Trudeau stated in a press release yesterday there is a “general consensus” among himself and our premiers to extend the border closure. Once I know for certain that this is the case, I will be contacting all effected guests. Hopefully this will be the last extension and we will be able to get back to business as usual come July.

It is a huge bummer so many people are missing their family vacations this summer and we really do miss seeing everyone. The entire tourism industry and so many other small businesses are feeling the effects of not having the economic support of your travel. We do want to say thank you to everyone who despite not being able to make it this year are keeping their reservations for 2021. It is a wonderful light at the end of the tunnel knowing that despite losing so much revenue this year we will be able to pick up like normal come 2021.

We are starting to get ahead of the virus in Ontario, and are doing especially well up here in the North West. Our premier has actually adopted a regional reopening strategy that allows different regions to open the local economies at different paces, rather than making decisions for the entire province as a whole. This is a welcome change as all of the cases in Ontario are centered around the Toronto area now. We are beginning to get back to life as normal up here and so far there haven’t been any repercussions. I believe this is why the government is opting to keep the borders closed for now. We are beginning to pull ahead and I would hate to see a second wave come through shortly after reopening and seeing all these businesses, ourselves included, have to shut back down and go back into quarantine. Hopefully nothing like that happens and this is the last border closure extension, and we can get back to business as usual come July.

In this down time we have been able to get quite a bit done around camp. It took much longer than expected because of all the initial cleaning and brush work involved, but I painted the ceilings in the kitchens and living areas in cabins 5 and 6. Man what a difference a coat of paint can make, everything looks much cleaner and the cabins are a lot brighter. just remember if you see any paint on the walls that was from the last person who painted years ago, not me – ha ha!

We also finally got the floor in the fish cleaning house fixed. The building has settled into the ground a little so the floor isn’t as level as it used to be, but new plywood helped strengthen it back up and the new linoleum is a welcome change from the torn stuff last year. I’m horrible at remembering to take pictures and didn’t get any before and afters of the ceilings, but here are a couple of the fish house. 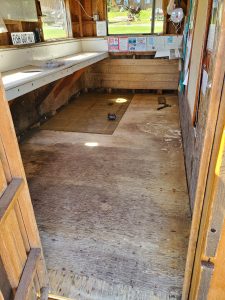 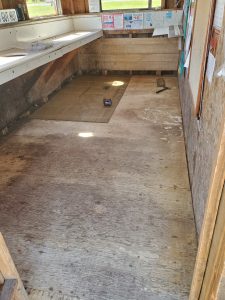 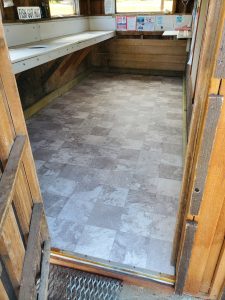 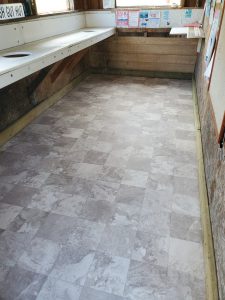 We are also putting an addition on the back of cabin 1, the materials have arrived and work should begin this week. We are going to build a new bathroom on the back of the cabin and then gut out the current bathroom to open up the kitchen some more and add a little more storage. We will finally be rid of that terrible shower that everyone, including us, hates.

The weather has been sporadic. It has been pretty windy most days and some have been hot pushing 80-90 degrees, and then a couple days later it’s back down to 50. There was actually about 8″ of snow north of us last week! We didn’t get any here but it was very cold and rainy and we almost had a frost. It has been very strange. I haven’t been fishing a whole lot, but I did go out to Red Rock two nights ago, and Lindsay and I caught probably 40 walleye in 2 hours. There were a lot of little guys but we probably turned loose about 5 that were around 18″ and i lost one at the boat well over 20″. It was a blast!

Well I think that is all for now, as mentioned above once I get certain confirmation about the border I will be contacting any effected guests. We sure hope everyone is doing well in these strange times, stay healthy!