Well as the title suggests, and as I’m sure many of you have heard, the border closure has been extended another month until July 21. As much as this is tragic news, it does come with a ray of hope. Nothing has been officially released, but several news outlets have reported that talks about reopening the border and developing and releasing a roadmap of what that will look like are in the works, and they have quoted various politicians across Canada, eluding to this information being fairly accurate. Some news outlets reported that the border restrictions could begin to loosen in July for fully vaccinated people looking to travel, as Trudeau is requiring Canada to have 75% of the population vaccinated with their first dose, and 20% fully vaccinated; and we are close at 66% and 17% respectively. Now we are remaining hopeful that all of this is true and things will begin to open up next month, but for now this is all speculative so we are keeping our expectations in check. There is supposed to be a news release tomorrow with more information and I will be sure to share a link to that info on our social media pages. You can read the most current information available here: https://globalnews.ca/news/7961418/covid-canada-us-border-closed-july-21/

In more exciting news, we have had a couple small groups of Canadian guests in, and the fishing has been really, really good. Great numbers are being produced and we are seeing some size as well! Below are some pictures from the last two weeks.

Here is Scott Laforest with a beautiful 32.5″ walleye, which I believe to be one of, if not THE biggest walleye I have ever seen come out of Press: 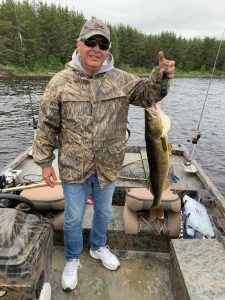 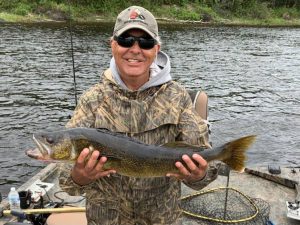 And here we have Doug Kelvin with an incredibly fat 41″ Pike he caught, weighing 24 lbs! 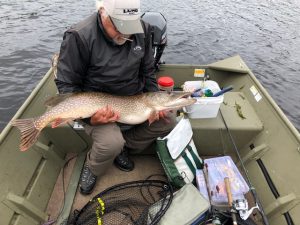 The weather has been all around dry, but fortunately it has cooled off a little over the last couple of weeks and we have seen some cloud cover. Water levels are pretty low and dropping, but not as quickly as they could be if it was still as hot as it was at the beginning of the month. The walleye are still being found in the current where there is cool moving water, but are beginning to move out onto the reefs and we are seeing some nicer fish coming up out of that deeper water. Despite only having a few guests through, we have seen at least 3-4 walleye over 23″ so far this year!

In other news, I was fortunate enough to take an absolutely massive black bear this spring! Since the spring hunt as been reintroduced, I have been buying a spring tag, mostly just to have with me when travelling to and from camp if there is a good opportunity to take a nice bear for the freezer. The tag is transferrable to the fall season if it isn’t used, so I have been using it strictly as an opportunity tag with plans to work harder in the fall when we have a little more time than we do in the spring. Anyway, Lindsay and I decided to go for a drive one evening before the season closed, and happened to stumble into this absolute monster of a spring boar: 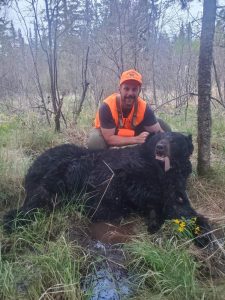 After seeing 10 other bears that night, and passing up 2 that I was within range of (they were maybe 80 lbs each) we stumbled into this old guy and I was able to get a shot. I didn’t get to weigh him as we was WAY too heavy for us to move whole so we butchered him right there, I am ball parking him at around 350-400 lbs in early June. I did weigh the 4 quarters, backstraps and loose meat, and the head and neck which came to a whopping 250 lbs, leaving behind a LOT of fat (and we took a bunch to render), the hide, rib cage and guts, which I figure had to be at least another 100-150 lbs. Given how late in the day it was and the temperature outside, I wasn’t able to take the time to skin the hide out for a rug or mount, so we butchered him quickly so as to not lose any meat, and still didn’t get home until 3 AM! I did however keep the skull for a trophy and to measure, and just finished cleaning it up yesterday and prepping for whitening: 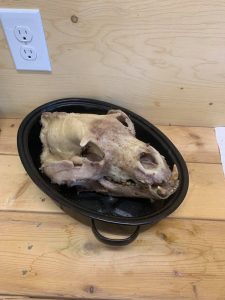 After some quick and very rough measurements, the skull should score around 20.5″, meeting the Boone and Crocket minimum of 20″. This is the first B&C animal I have ever been lucky enough to take, and I can’t wait to display this skull!

Here is one more picture I find pretty interesting, check out how much fat this bear was carrying considering it was June 2nd, when I took him: 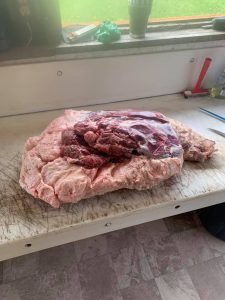 He must have wintered very well and found a great source of food this spring. And no, this was nowhere near a dump or landfill, haha!

Anyway, I believe that is all for now. We are wishing everyone the best and hoping like crazy the border opens up next month. I’ll be sending emails out today to all of the affected guests from this closure. Take care!