As the title suggests, we have been having an extremely warm fall! About mid to late September, we had a week of cooler weather and got a lot of rain, as much as 5″ in one 24 hour stretch. Since, things have been right back to bright, warm, and sunny, but fortunately the rain we did receive brought the lake up to levels much more akin to normal for this time of year. The lake is still low, but not nearly as low as it was a month ago. In fact we actually have had to pull the docks up twice now, a welcome change from constantly pushing them out. We are yet to have our fist frost and according to the weather there isn’t one in sight. Lindsay and I still have lots of vegetables finishing ripening in the garden actually, probably the first time we have ever been able to push it into October. Daytime temps have been consistently over 70 degrees every day with the warmer days still getting up over 80, and with the little wind we have been having the weather has been absolutely gorgeous!

The fishing has remained fantastic throughout the fall. The walleye are still on the humps, with some good numbers and bigger fish being caught at depth around the reefs, even out to 40 feet. The usual fall smallmouth migration onto the humps, especially at 7 Pine Island, has been occurring as normal and there have been some really nice bass caught! I unfortunately haven’t received any pictures of bass but have heard of groups catching as many as 20-30 in an afternoon with some really nice 18-20″ fish being caught. Below is a picture of Renee with a monster Northern she caught in August!

We have remained pretty busy throughout the fall, especially since the border finally re-opened, but our fishing season is tapering down and we are getting into moose season. We had a group of archery hunters in last week and have another in this week that have been putting in lots of work on the ground to try and fill their tags. Unfortunately neither group has been successful yet despite seeing several animals each. Both groups have cow tags which of course are difficult to fill with a bow as the cows don’t tend to come into a call like a bull will. It also doesn’t help when the bulk of the animals the groups have been finding have been bulls. Lot’s of really cool encounters though with one bull coming into 7 yards! Hopefully their luck changes, and I’m sure we will see some animals on the ground when rifle season opens on October 16.

Speaking of moose, about 2 weeks ago I woke to find this young bull laying in the lake near camp! 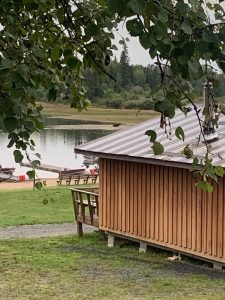 I apologize for the almost 2 month wait since my last post. Since the border opened back up we have been pretty busy and I just haven’t taken the time to get an update on here. It also doesn’t help that hunting seasons have begun to open up, so any and all of our spare time has been spent chasing some critters around in the woods. Lindsay, Cedar, and I logged a few really fun duck hunts this fall and have been slowly transitioning out of that into grouse hunting. We like to try to get a bunch of birds for the freezer before things get pretty crazy with big game hunting. 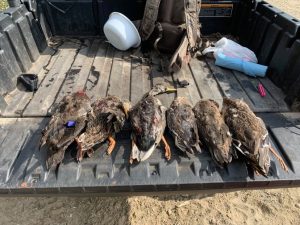 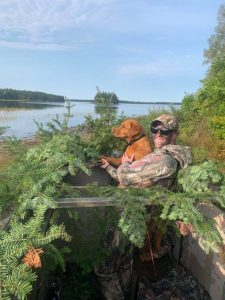 I have a pretty busy fall ahead, as we have a week of moose hunting starting on October 16. Then on the following week we will be very quickly getting camp closed down and getting moved home so we can get down to our cabin near Fort Frances for the opener of deer hunting on October 30, where we will be spending close to a week chasing whitetails. After that we are headed home, around November 5, as I will be getting packed up to head down to Colorado on November 8 for my first ever elk hunt. Needless to say I am getting extremely excited for all of these adventures and cannot wait to meet my friend and hunting partner in Colorado for our DIY hunt. It will be both of our first elk hunt and first western mountain hunt. It’s going to be a huge learning curve I’m sure, but I can’t wait! There will be lots of pictures and blog posts to follow this fall!

In other news, Mom had surgery on her back on September 15, it was very successful and she is recovering well! She has been dealing with debilitating sciatica pain in her leg caused my a herniated disk in her back for the last couple of years, and we finally decided the only way for it to get better was to go ahead with the surgery and have 2 of her vertebrae fused. The operation only took roughly 90 minutes, and now that her nerve isn’t being pinched she is essentially pain free! Well, pain free in her leg that is, of course now she has a sore back from the operation but that will heal with some time and is a good reminder for her to take it easy for the next couple of months while her back heals up. Thankfully she can stand and walk for a lot longer than the couple of minutes she was able to stand at a time before the surgery.

Well I think that is all for now, I likely won’t be posting a whole lot between when moose hunting opens and I get home from Colorado, but will try to get a quick post up with an update about moose season. And of course I will have lot’s to write about in late November. Stay tuned!