I would like to start off by apologizing for taking well over a month to get another post up, but hunting season has started up and we have been pretty busy. Duck season opened on September 10th, and grouse on September 15th, so we have been spending quite a bit of time out chasing birds. Cedar and I had a great opening day shoot for ducks, coming home with a nice limit including two wood ducks which are a rarity around here! 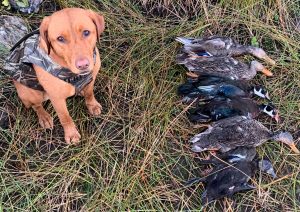 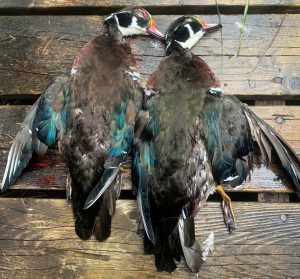 Since then we made it out a few more times, and even brought a couple of my friends from town out; all with great success. There seems to be a lot of birds around this year and there is definitely a very thick crop of wild rice.

The grouse hunting has been really good as well, and most outings have produced limits. Lindsay, Cedar, and I have been enjoying some early morning drives chasing them around and doing some scouting for the upcoming rifle season for moose. Two more friends, whom I moose hunt with, were up over the weekend so we could do just that. While out we managed to get our 4-person limit of 20 birds, and found a nice moose shed! It has been a lot of fun and is really getting us all fired up for moose season in less than two weeks. 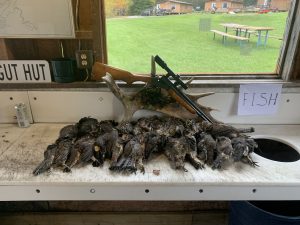 Archery season is currently open for moose right now and we have two groups in camp who have been out hunting hard. There was a surplus of cow archery tags in our area this year so there are lots of those in camp, but only one bull tag. The group with the bull tag managed to fill it this week, but so far there hasn’t been any success on the cows (I didn’t get a pic of the moose but will hopefully get one from the group and include it in a future post). Cow hunting for archery is very difficult of course since they don’t like to come to a call like a bull will, which is part of the reason there are so many tags available. The archery groups will all be gone this weekend, and our three groups of rifle hunters will be arriving throughout next week to prepare for opening day. The moose are rutting and moving quite a bit right now, so hopefully they see some more success in their last couple days!

Fishing traffic has slowed as myself and our groups of guests are all focused on hunting, but lots of fish are being caught when sought after. It’s pretty typical fall fishing, the water temps are dropping and the walleye are still on the reefs but are beginning to work back up them into the shallower water on top. The smallmouth are really congregating on some of the reefs as well, especially around 7 Pine Island. I really love smallmouth fishing this time of year as it is pretty easy to catch some really nice fish and they put up such a fight.

I had a bunch of friends up over the long weekend in September and 10 of us managed to come back with our limit of walleye. We had a ton of fun and a great fry, plus everyone got to bring some home as well! 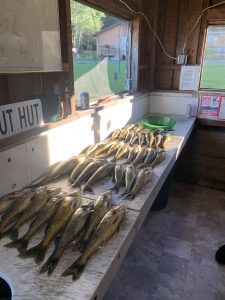 The weather has actually been pretty nice so far this fall. We had an early cold snap and a couple heavy frosts in early September, but since it hasn’t hardly dipped below freezing, even at night. Most nights the temps are getting down into the mid 40’s, and they are warming back up to the low 60’s during the day. It has been relatively cloudy with intermittent rain, but nothing serious that would ruin an entire day of hunting or fishing. I’m hoping this warmer weather lasts until we get closed up so we don’t have to worry about any frozen pipes before closing, fingers crossed.

In other news, we celebrated Mom’s 70th birthday this year by inviting a bunch of friends out to camp and doing a big pig roast! It was a really great time with too much food and drinks, just the way a birthday should be! Thanks to everyone who made the journey into camp to celebrate with us, Mom really had a lot of fun and appreciated it. As usual I’m bad at getting photos, but have a couple pictures of the guest of honour opening up some presents. 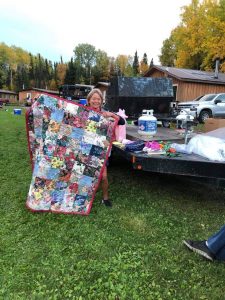 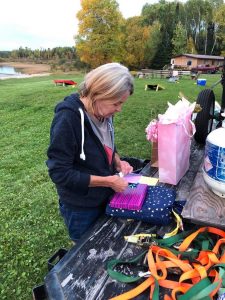 I think that’s all of the news for now, I’ll try to get another post or two up before we move home for the winter and let everyone know how the rifle hunt goes.

We hope everyone is staying healthy and safe,