Well, as the title suggests, we have had some strange weather. The first two weeks of the month were cool with temps in the high 50’s and mid 60’s, lots of wind, and what seemed to be a never ending drizzle. The most rain we got in any 24 hour period was just over an inch, but we probably got 4-5 inches over the two weeks. Since the rain has stopped and the sun is back out, the temps have gone back up into the 80’s! There is a little more rain and cool weather ahead though, according to the forecast anyway.

The fishing was a little difficult during the poor weather, which had a lot to do with the constant wind. It was very difficult to hold on any of the humps or to not be drifting too fast. The walleye are still on the humps but seem to be spotty. You can find an active reef and after a few fish they seem to spook out or aren’t active anymore and you need to move on to the next school. That being said, good numbers and good size are still being produced, it is just taking a little more work. I haven’t heard any consistent numbers regarding their depth, and haven’t been out in a couple weeks myself to find out. The little intel I have heard is that they don’t seem to be at one specific depth, making drifting the reefs the best option as you can fish the whole range.

Duck Season opened on the 10th so Cedar and I went out for her first hunt! After using the first couple opportunities to knock down birds as target practice, I dropped a lone mallard that cupped into the decoys. I sent Cedar out to retrieve it and after giving the bird a good sniff she continued to swim around looking for her duck dummy. I waded out into the water, grabbed the duck, and tossed it about 10 feet. Cedar immediately swam over and grabbed the duck and brought it back to shore. That was all it took for her to figure out duck hunting as I got two birds out of the next flock and she located and retrieved both of them!

On the second bird of the double, Cedar got tangled in a decoy on her way back to shore. She dropped the bird on shore as I untangled the decoy and waded out to throw it back into my spread. While we had our backs turned, the second duck she retrieved decided it was time to quit playing dead and flew off into the woods just as I was turning back around. He was totally limp playing dead the entire time she had him in her mouth, and at the first sight of opportunity he was out of there! I ended up getting one more bird so we came home with 3 nice ducks! It was a great hunt with my new partner! 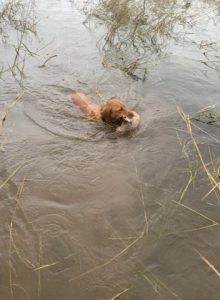 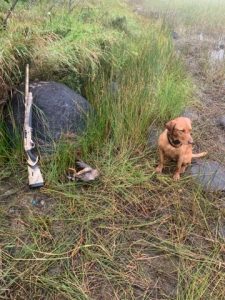 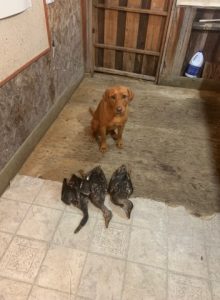 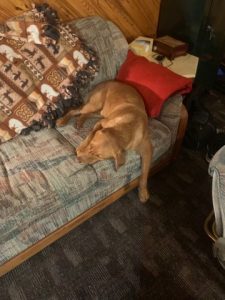 Our new shop is finished and I have most of my tools and spare parts moved back in and put away. Just a little more cleaning to do in the pole barn and we will be all set. It is so nice finally having adequate storage and space to work on things, especially when it is raining!

I will try to get some more fishing info up if I hear anything, and I’m hoping to get out soon myself!